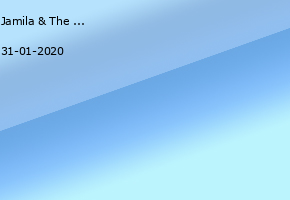 Let's celebrate JAMILA & THE OTHER HEROES' debut album "SIT EL KON. ست الكون" (The Grandmother of the Universe), to be released by SPRINGSTOFF on 31.01.2020. Be ready for special features with Roland Satterwhite, Fan Tasma, Dan Timm, Milad Khawam and Heart Chor, who will warm you up after a live show by Tolyqyn. Afterparty: Schmeckefuchs & UBUNTU MARINKA. (more information below)

“We come from manywhere and that's how we sound!”, explains Jamila Al-Yousef, the front singer of the band, who was born in East Berlin on the day the wall came down. “Manywhere“ not only refers to the different geographical origins of the band members; who are from Syria, Palestine, Poland and Germany.

Jamila & The Other Heroes are more than just five Berlin-based musicians who have overcome political and musical boundaries. JAMILA also is the name of Al-Yousef’s grandmother who died 1953 in Sarra, a small Palestinian village in the mountains of Nablus. Listeners can hear her and the many other unheard global voices of strong women (and sometimes men) pulsate through Jamila’s powerful vocals. They too are part of the OTHER HEROES.

Jamila & The Other Heroes combine psychedelic desert funk with political content. While racist agitation is increasingly becoming acceptable in many circles of our society, the five musicians have made it their mission to break down prejudices towards people with narratives of migration and asylum and make the abundance of cultural diversity more visible and audible.

“For us music is not free of politics! Given that in particular women of color are underrepresented in the music industry, we want to set an example for emancipation and empowerment. This is why we turn into heroes and are determined to advocate in our lyrics and sounds for a more just and fair society”, explains Jamila who put together the band in 2016 after returning from a magical concert by Erykah Badu and Hiatus Kaiyote in New York.

Percussionist Salam Alhassanand bass player Bilal Hammour fled from Syria to Germany in 2015 and bring their contemporary as well as folkloric musical influences from the Levant region into the mix. Apart from making music, Salam is also an illustrator and designed the EP of the band. Bilal is studying music at the prestigious Jazz Institute Berlin (JIB), where drummer Kuba Gudz from Poland, one of Berlin’s most versatile and sought-after drummers, also learnt his craft. Guitarist Leaon Sánchez met Jamila while studying cultural studies in Hildesheim. His style is inspired by Afro and Latin American music, which he collected in South America and also plays as DJ Bouillabaisse. All five band members have one thing in common: their youth was heavily influenced by rock and hip hop music.

After three years of being on tour in Germany, the Middle East and North Africa, JAMILA & THE OTHER HEROES have now channelled all their live energy into the debut album "SIT EL KON. ست الكون." (The Grandmother of the Universe), funded by Initiative Musik.

SIT EL KON sounds like a boundless dream. It takes listeners on a furious journey through unconscious galaxies which unite us with the experiences and spirits of our ancestors that continue to exist on this planet in the here and now. Psychedelic guitar riffs are vibrating on a warm and earthy fundament of wavy bass runs and Arab percussion sounds. The dance floor they create is a breeding ground for people to meet - the band’s response to the currently operating exclusion mechanisms of our time.

Jamila’s at times soft and at other times emphatic voice harmonically weaves itself through dense and eclectic yet always optimistic sounding compositions. Her emancipatory lyrics invite listeners to show mutual empathy. The tracks on the album are in English and Arabic and feature stories about migrating families and feminist empowerment (Farashat); of a dream in which Jamila meets her grandmother in the universe (Sit El Kon); of letting go of loved ones who have passed on without saying good bye (Abu Dub); of journeys to heal the inner child (Inner Child); of proximity and distance dynamics in families (Khalas! The Umbilical Chord); of love in times of capitalism (Aliens in my Bed); and of the search for solidarity and a community, in which we no longer have to be alone with our feelings and where we support and inspire each other (Fight Club).

The album was recorded analogue on an old Otari reel to reel tape recorder in the Berlin based Big Snuff Studio. Big Snuff’s sound engineer Richard Behrens provided his collection of treasures from the 60s and 70s, thus allowing the band to produce the unmistakeable sounds of Moog synthesizer, a supro guitar amp which amongst others Led Zepellin used for their recordings. The band also used the Telefunk Echo Mixer for voice effects.

The overall message of the album SIT EL KON is to animate listeners to connect and join forces: We all can be heroes. Discover your super powers and make the world a better place every day!

Tolyqyn is an alternative rock band, with Kuba Gudz on drums, Tal Arditi on Guitar, and Roland Satterwhite on plucked viola and voice.

Heart Chor is a vocal collective that will move you with the power of delicious, cheesy love! Be ready to melt to a mix of sexy originals, twerkeable tunes and heartwarming classics - and let us fire you straight into the heart of our love galaxy!

In 2006 Schmeckefuchs started mixing in the hidden courtyard's of Damascus, with an ancient soundsystem from Souq al-Haramein - the Thieves Market. From Damascene Rooftops his journey led him to open airs in the Dead Sea Desert and finally to Berlin, where his music took an insidious electronic drift.

Felix Schmeckefuchs is an ever-curious dancefloor researcher and musical quantum engine, constantly pushing and testing the boundaries of what is deemed appropriate at a rave. While his deep, energetic and percussive signature sound is easily recognized, he loves to take the audience off guard when least expected and turn the dancefloor upside down in a humorous twist.

As a co-founder of Rebellion der Träumer series and Bucht der Träumer* Festival he has been known to host some of the most exquisite shakedowns, the Berlin rave community has seen in recent years. Schmeckefuchs has performed on almost every floor Berlin has to offer, including Kater Blau's Heinz Hopper and Sisyphos' mighty Hammahalle.
Festival appearances at ФУЗИОН, Garbicz and Feel Festival are but a few among many others.

Schmeckefuchs also is tirelessly working to keep the rave community conscious and organizes resistance against the global authoritarian backlash, keeping the message of diversity and acceptance alive, that club
and festival culture has fostered since its very beginnings.

Born and raised on the core of on the brazilian african culture, Urubu learned early flapping her wings in rhythm. Before meeting the machines she met the drum skin
A persona that grew within Vodoohop parties and journeys. From that to a big digging into psychedelic melting with the brazilian most folklore sounds, loads of vibrating skins, wooden samples and oscillators.
Since then has frequently traveled and performed in many countries and also through many cities around Brasil, developing each time a broader and diverse exploration of all corners on music spectrum. Since for 5 years has created a solid base in Europe playing on the most prestigious festivals around the old continent, like Fusion, Nation of Gondwana Through music on gigs Urubu project is a try on a cocktail of electronic with tropical rhythmic waves, discovered grooves, soulfull machines and refreshing songs.